Founded in 1882 by pioneer lumberman and civil engineer William H. Hardy, the City of Hattiesburg was named in honor of Hardy’s wife Hattie. The town grew as a stop on the railroad between Meridian and New Orleans. It became a commercial center of the regional timber industry, and was incorporated in 1884 with a population of 400.

The first Jews arrived in Hattiesburg a few years later. According to one account, Maurice Dreyfus (d. 1937) was the first Jew to settle in Hattiesburg, moving from Brookhaven, MS, to Hattiesburg in 1890 to operate a saw mill. In the same year, other Jewish immigrants joined Dreyfus due to the town’s growing economic potential, and they began to conduct regular religious services at the home of Maurice Dreyfus. This small nucleus of Jews, formed over 120 years ago, was the beginning of B’nai Israel Congregation.

One of these earliest Jewish settlers was Sam Shemper (1858-1946) who, in 1905, established the well-known Sam Shemper & Company, a scrap iron, raw material and hide business. Until recently, when it was sold, it was owned and managed by Jerry, Marvin, and Sam Shemper.

Another settler was Frank Rubenstein (1884-1953.) He first came to Hattiesburg in 1906 at the age of 22 and later opened a store called “The Hub.” Rubenstein also owned a store in Sumrall, MS, managed by his brother-in-law. In 1919, the Hattiesburg American newspaper called Rubenstein “one of the leading merchants of the city” and reported that he was planning on expanding his store by buying a larger building in downtown Hattiesburg for $31,000. Upon purchasing the building, he transformed the four existing businesses into one store, creating one of the largest department stores in Hattiesburg.

Many of the early Jews in Hattiesburg owned retail stores. By 1919, many Jewish-owned stores were advertising their closing for the High Holy Days in the local newspaper. These stores included The Globe, The Leader Family Outfitters, L. Rubenstein & Co., Adler Dry Goods, and S & H Katz. Interestingly, all of these stores closed for two days for Rosh Hashanah (The Jewish New Year), showing they were traditional in observance, but were reopened on Saturday, which reflects the compromises that even observant Jews had to make to thrive as retail merchants in Hattiesburg.

A major figure in the retail business in Hattiesburg was Louis Buchalter (d.1986), a well-loved tailor. A native of Jablonow, Poland, Buchalter came to New York in 1911, following his Aunt Fannie, who had arrived several years before. Upon arrival in New York, he found himself working a 12-hour day for only one dollar per day. After hearing of a job opening, he moved to Natchez, MS, where he also met his wife Jennie Saltzman. After they married, the couple moved to Hattiesburg with only $75 in their possession. Buchalter soon opened his own tailor shop called Louis Tailoring Co. in 1915. It was in this store that Buchalter became an important figure in the town. He took great care and pride in his suits, tailoring for fifteen years without the aid of a sewing machine. Even after he purchased a sewing machine, it was used only for alterations. Though originally all of the suits from Louis Tailoring Co. were hand sewn, as the demand for Buchalter’s work grew, he had to begin buying ready-made suits, limiting his hand-sewn suits to special occasions only. In 1982, after 68 years of business in the same location on East Pine Street, Buchalter closed the store due to his declining health.

In 1908, fifteen Jewish men had founded a local chapter of B’nai B’rith (The Children of the Covenant, a charity organization), and in 1915, the Jews of Hattiesburg organized their community under the name “Congregation B’nai Israel” (The Children of Israel) as the city’s first and only Jewish congregation. In 1939, the Jewish women in Hattiesburg founded a chapter of Hadassah (the largest Zionist organization of Jewish women, supporting medical training, research, and education).

In 1900 the congregation occupied the top floor of the Odd Fellows Building downtown as its new place of worship and assembly. In 1920 it purchased old army barracks and used the lumber to build its first permanent structure at the intersection of Hardy and West Pine Streets, where Bancorp South’s main office stands now. Its current synagogue at the corner of Mamie Street and 12th Avenue South was built in 1946. 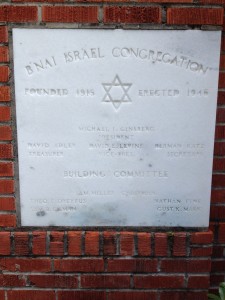 Hattiesburg Jews have been prominent in the community. Marvin Reuben (1923-1994) made his mark on the community through his work in the media and his commitment to social justice. After his service in the Air Corps during World War II, Reuben began doing radio broadcasting, and eventually became general manager and executive vice president of WDAM-TV. In his 33 years of work with the station, he became known for his editorials, which he delivered on the air. Of the many issues in social justice that Reuben addressed, he was best known for his stance in opposition to the Ku Klux Klan. In response, the Ku Klux Klan made efforts to silence him; they threw acid on his wife’s (Betty) car, shot the radio tower, and burned three crosses in front of the station. In 1992, he received the Hub Award, and the mayor proclaimed “Marvin Reuben Day.” Betty (1926-2014) was a major sponsor of the continuing education division of USM (OLLI) and of other civic projects.

Herbert Ginsberg (1924-2006) was a local lawyer who was a law partner of Paul Johnson, who served as governor of Mississippi in the 1960s. Ginsberg served as a U.S. Magistrate during the 1960s. His wife Lou was very active with the region’s Jewish youth. She spent many years as the regional advisor for the Southern Federation of Temple Youth, and worked at the Henry S. Jacobs camp for 24 summers.

Maury Gurwitch was a successful retailer as the owner of Smart Shoes, and was the treasurer of B’nai Israel for nearly 18 years before passing the baton. His wife Shirley had been one of the most active members of Temple B’nai Israel’s Sisterhood prior to their moving to Houston, TX in 2015.

Milton Waldoff was the owner of two specialty stores for men and women, Waldoff’s, and Milton’s Ltd. He was active in numerous civic organizations and congregational roles, such as President of the Hattiesburg Area Chamber of Commerce (now the Area Development Partnership, ADP), Chairman of Lamar & Forrest Counties American National Red Cross, and on the boards of the Pine Burr Area Boy Scouts of America, Forrest & Lamar Counties United Way, and many more.

Jerry Shemper, a longtime local business leader of Ben Shemper & Sons that existed in Hattiesburg from 1905 until it was sold in May 2007, has served on the Hattiesburg City Council and on the Board of Hattiesburg Area Habitat for Humanity. His wife Linda has been active in the Forrest County Democratic Committee, and served for several years as Sisterhood’s president.

Hattiesburg has remained a relatively small but stable Jewish community. In 1937, 215 Jews lived here. In 1984, 180 Jews still lived in Hattiesburg. By 2011, this figure stood at 95 adults and children. While retail business ownership was almost universal among Hattiesburg Jews in the early 20th century, today, only one, Sacks Outdoors, owned by David Sackler, remains. His wife Teresa has been active in the Sisterhood and was the editor of the congregation’s newsletter for several years. In the past 25 years, a growing number of Temple B’nai Israel’s members moved to town from other states and have been engaged in professional work such as medicine, law, and academia.